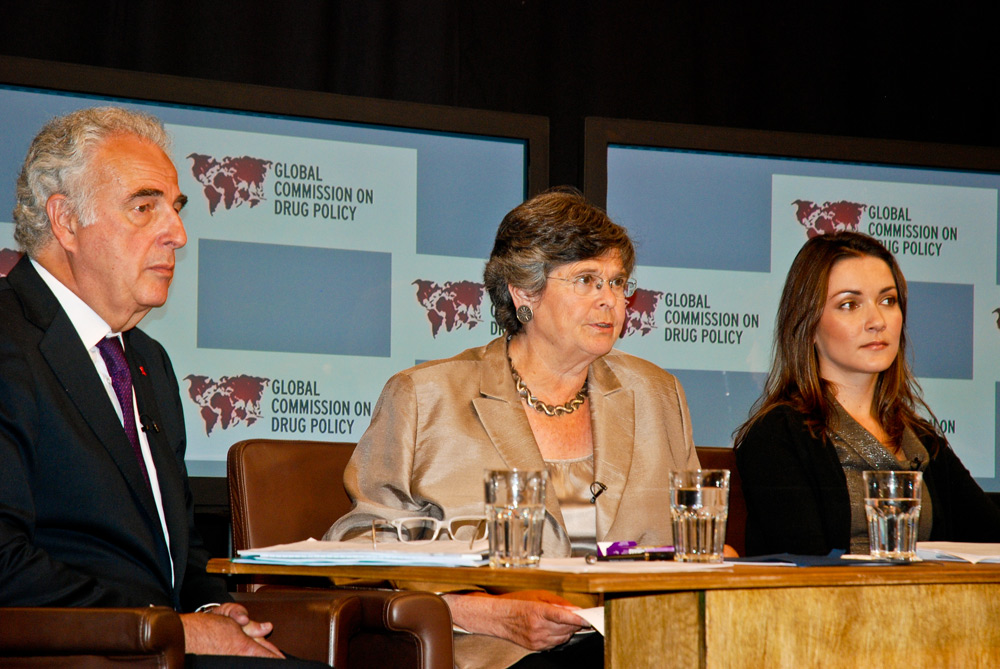 While Some Countries Have Virtually Eliminated Drug-Related HIV Transmissions, Drug War Policies in U.S., Russia, Thailand and China Cause Millions of Needless Infections and AIDS Deaths

Today, the Global Commission on Drug Policy will release a groundbreaking report at a press conference in London followed by a worldwide teleconference. The report condemns the drug war as a failure and recommends immediate, major reforms of the global drug prohibition regime to halt the spread of HIV infection and other drug war harms.

The report is being released in advance of the International AIDS Conference, the world’s largest gathering of HIV/AIDS experts. It will be held in the U. S. for the first time in 22 years this July 22-27, in Washington DC.

The global war on drugs is driving the HIV pandemic among people who use drugs and their sexual partners. Throughout the world, research has consistently shown that repressive drug law enforcement practices force drug users away from public health services and into hidden environments where HIV risk becomes markedly elevated. Mass incarceration of nonviolent drug offenders also plays a major role in spreading the pandemic. Today, there are an estimated 33 million people worldwide living with HIV – and injection drug use accounts for one-third of new HIV infections outside of sub-Saharan Africa.

The report describes the remarkable failure of drug law enforcement policies in reducing global drug supply, noting that the worldwide supply of illicit opiates, such as heroin, has increased by more than 380 percent in recent decades. The Commissioners also stress the drug war’s contribution to the growth of organized crime and violence, and urge countries that under-utilize proven addiction treatment and public health measures to immediately scale up evidence-based strategies to reduce HIV infection and protect community health and safety. These measures include sterile syringe distribution, safer injecting facilities, and prescription heroin programs. “Failure to take these steps is criminal,” the Commissioners state.

The report also depicts how the fight against HIV is being won in countries where addiction is treated as a health issue. In Australia and European countries such as Portugal and Switzerland,  newly diagnosed HIV infections have been nearly eliminated among people who use drugs, just as vertical transmission of HIV has been eliminated in countries where broad access to prevention of mother-to-child transmission of the virus is available. However, a number of specific countries, including the U.S., China, Russia and Thailand, have ignored scientific evidence and resisted the implementation of evidence-based HIV prevention programs – with devastating consequences. In Russia, for example, approximately one in one hundred adults is now infected with HIV. In the United States, Congress recently re-instated a longstanding ban on the use of federal funds for syringe exchange programs.

This is the second report published by the Global Commission. Its first report, released in June 2011, generated unprecedented media coverage and catalyzed international debate about the urgent need for fundamental reforms of the global drug prohibition regime. The Global Commission is the most distinguished group of high-level leaders to ever call for such far-reaching changes – including alternatives to incarceration, greater emphasis on public health approaches to drug use, decriminalization, and experiments in legal regulation.

The Commission’s recommendations are summarized here. They include:

– Push national governments to halt the practice of arresting and imprisoning people who use drugs but do no harm to others.

–  Measure drug policy success by indicators that have real meaning in communities, such as reduced rates of transmission of HIV and other infectious diseases, fewer overdose deaths, reduced drug market violence, fewer individuals incarcerated and lowered rates of problematic substance use.

– Respond to the fact that HIV risk behavior resulting from repressive drug control policies and under-funding of evidence-based approaches is the main issue driving the HIV epidemic in many regions of the world.

– Act urgently: The war on drugs has failed, and millions of new HIV infections and AIDS deaths can be averted if action is taken now.

How the drug war fuels the HIV pandemic:

– Fear of arrest drives persons who use drugs underground, away from HIV testing and HIV prevention services and into high-risk environments.

– Prohibitions or restrictions on opioid substitution therapy and other evidence-based treatment result in untreated addiction and avoidable HIV risk behavior.

– Limited public funds are wasted on harmful and ineffective drug law enforcement efforts instead of being invested in proven HIV prevention strategies.

The global war on drugs is driving the HIV/AIDS pandemic among people who use drugs and their sexual partners. Throughout the world, research has consistently shown that repressive drug law enforcement practices force drug users away from public health services and into hidden environments where HIV risk becomes markedly elevated. Mass incarceration of non-violent drug offenders also plays a major role in increasing HIV risk. This is a critical public health issue in many countries, including the United States, where as many as 25 percent of Americans infected with HIV may pass through correctional facilities annually, and where disproportionate incarceration rates are among the key reasons for markedly higher HIV rates among African Americans.

Aggressive law enforcement practices targeting drug users have also been proven to create barriers to HIV treatment. Despite the evidence that treatment of HIV infection dramatically reduces the risk of HIV transmission by infected individuals, the public health implications of HIV treatment disruptions resulting from drug law enforcement tactics have not been appropriately recognized as a major impediment to efforts to control the global HIV/AIDS pandemic.

The war on drugs has also led to a policy distortion whereby evidence-based addiction treatment and public health measures have been downplayed or ignored. While this is a common problem internationally, a number of specific countries, including the U.S., Russia and Thailand, ignore scientific evidence and World Health Organization recommendations and resist the implementation of evidence-based HIV prevention programs—with devastating consequences. In Russia, for example, approximately one in one hundred adults is now infected with HIV.

In contrast, countries that have adopted evidence-based addiction treatment and public health measures have seen their HIV epidemics among people who use drugs—as well as rates of injecting drug use—dramatically decline. Clear consensus guidelines exist for achieving this success, but HIV prevention tools have been under-utilized while harmful drug war policies have been slow to change.

This may be a result of the mistaken assumption that drug seizures, arrests, criminal convictions and other commonly reported indices of drug law enforcement “success” have been effective overall in reducing illegal drug availability. However, data from the United Nations Office on Drugs and Crime demonstrate that the worldwide supply of illicit opiates, such as heroin, has increased by more than 380 percent in recent decades, from 1000 metric tons in 1980 to more than 4800 metric tons in 2010. This increase coincided with a 79 percent decrease in the price of heroin in Europe between 1990 and 2009.

Similar evidence of the drug war’s failure to control drug supply is apparent when US drug surveillance data are scrutinized. For instance, despite a greater than 600 percent increase in the US federal anti-drug budget since the early 1980s, heroin price in the U.S. has decreased by approximately 80 percent during this period, and heroin purity has increased by more than 900 percent. A similar pattern of falling drug prices and increasing drug potency is seen in US drug surveillance data for other commonly used drugs, including cocaine and cannabis.

As was the case with the U.S. prohibition of alcohol in the 1920s, the prohibition of drugs now fuels drug market violence around the world. For instance, it is estimated that more than 50,000 individuals have died since a 2006 military escalation against drug cartels by Mexican government forces. While supporters of aggressive drug law enforcement strategies might assume that this degree of bloodshed would disrupt the drug market’s ability to produce and distribute illegal drugs, recent estimates suggest that Mexican heroin production has increased by more than 340 percent since 2004.

With the HIV epidemic growing in regions and countries where it is largely driven by injection drug use, and with recent evidence that infections related to injection drug use are now increasing in other regions, including sub-Saharan Africa, the time for leadership is now.

Unfortunately, national and United Nations public health agencies have been sidelined. While the war on drugs has been fueling the HIV epidemic in many regions, other law enforcement bodies and UN agencies have been actively pursuing an aggressive drug law enforcement agenda at the expense of public health. Any sober assessment of the impacts of the war on drugs would conclude that many national and international organizations tasked with reducing the drug problem have actually contributed to a worsening of community health and safety. This must change.

1. Acknowledge and address the causal links between the war on drugs and the spread of HIV/AIDS, drug market violence and other health (e.g., hepatitis C) and social harms.

2. Respond to the fact that HIV risk behavior resulting from repressive drug control policies and under-funding of evidence-based approaches is the main issue driving the HIV epidemic in many regions of the world.

3. Push national governments to halt the practice of arresting and imprisoning people who use drugs but do no harm to others.

4. Replace ineffective measures focused on the criminalization and punishment of people who use drugs with evidence-based and rights-affirming interventions proven to meaningfully reduce the negative individual and community consequences of drug use.

5. Countries that under-utilize proven public health measures should immediately scale up evidence-based strategies to reduce HIV infection and protect the health of persons who use drugs, including sterile syringe distribution and other safer injecting programs. Failure to take these steps is criminal.

6. The public and private sectors should invest in an easily accessible range of evidence-based options for the treatment and care for drug dependence, including substitution and heroin-assisted treatment. These strategies reduce disease and death, and also limit the size and harmful consequences of drug markets by reducing the overall demand for drugs.

7. All authorities—from the municipal to international levels—must recognize the clear failure of the war on drugs to meaningfully reduce drug supply and, in doing so, move away from conventional measures of drug law enforcement “success” (e.g., arrests, seizures, convictions), which do not translate into positive effects in communities.

Your ticket for the: Six Former Presidents, Richard Branson and Other World Leaders: Criminalization of Drug Use Fuels the Global HIV/AIDS Pandemic