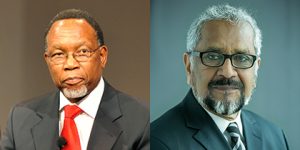 Kgalema Motlanthe was politically active from an early age, serving in the ANC (African National Congress) and imprisoned for ten years on Robben Island under Apartheid. Upon his release in 1987, he organized the mine workers, strengthened the unions, and participated in re-establishing the ANC structures in 1990. He then served two terms as Secretary-General of the ANC (1997-2007) before becoming President of South Africa and then Deputy President until 2014.

Mr Motlanthe said, “No one can deny the harms of drugs on societies, but neither can anyone deny the harms of unfit control policies. These policies, aimed at eradicating drugs and focused on repression, have created a global environment where criminalization fuels social stigma and discrimination. We need to review our approaches, incrementally, to rebuild trust between those left behind and the rest of society.”

Cassam Uteem trained as a social worker and participated in Mauritius’ struggle for independence. Over 30 years ago, as a Counsellor of the City of Port Louis, he worked to introduce the first drug rehabilitation services in the country. Mauritius has since pioneered drug treatment and harm reduction services in Africa. Mr. Uteem went on to become the longest serving President of Mauritius.

Mr. Uteem said, “Drug use is a reality in our societies, and we used to believe that only punishment was a deterrent to this use. Global evidence showed us that we were wrong, and we have to change course. Our approach must be based on people and their needs, on providing services to those who require them, and on preventing use as well as providing sustainable socioeconomic responses to the most vulnerable in our societies. I look forward to working towards those objectives as a member of the Global Commission.”

Olusegun Obasanjo, former President of Nigeria and Member of the Global Commission on Drug Policy, said, “I welcome Kgalema Motlanthe and Cassam Uteem to the Global Commission. While our countries are not major drug producing countries, the drugs that transit and the ones that are consumed, combined with weak governance structures, pose multiple threats. Now with strong voices from six continents, the Global Commission truly contributes a wealth of knowledge and experience to the ever-more global debate on the need to reform national drug policies and the international system.”

Your ticket for the: Press Release: The Global Commission welcomes Kgalema Motlanthe and Cassam Uteem as new members