Towards UNGASS 2016: Strengthening a public health approach when addressing the world drug problem 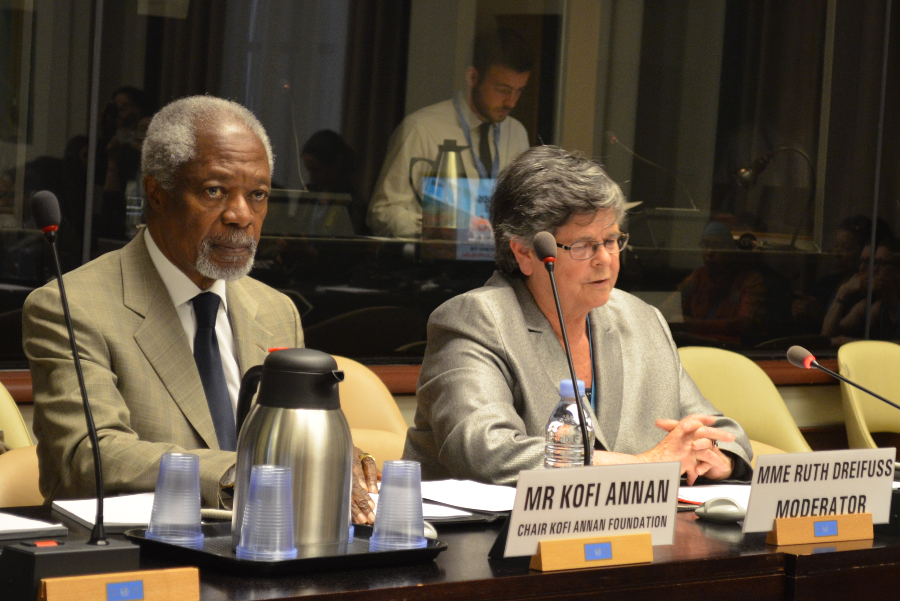 First of all I would like to thank the eleven governments who organized this meeting for inviting me to address you.

Unfortunately, current drug policies in many countries will not lead to the achievement of that objective.

To the contrary, those policies have resulted in what the United Nations Office on Drugs and Crime has called ‘unintended consequences’.

Those unintended consequences include the creation of a huge, international criminal black market that fuels corruption and spreads violence.

Misguided attempts in some countries to prevent the use of drugs by only punitive measures have not worked; instead they have resulted in mass incarceration.

And in other countries, the so called “war on drugs” has led to massive insecurity.

A criminal record for a young person for a minor drug offence can be a far greater threat to their wellbeing than occasional drug use.

In many parts of the world, drug users are stigmatized, live under constant threat of arrest and are prevented from seeking treatment and support.

Even when policies aimed at drug cartels have been relatively successful, they often simply shift the problem elsewhere: reduction in one country leads to an increase in another.

We know too that when law enforcement suppresses the supply of one substance many users simply switch to another, sometimes a more harmful substance.

So I am convinced that ccurrent drug policies have to be reformed to ensure that they encourage prevention and treatment based on evidence of what works.

I am especially concerned about the situation in Africa.

In recent years, the Continent has become a hub for drug trafficking and the domestic consumption of drugs is also on the rise.

And yet there are very few or no prevention and treatment services available in most of the African countries.

At the same time, under current drug control policies, African access to essential medication for pain management is highly restricted.

We know that 90 percent of morphine is prescribed in North America and Europe. In many developing countries, patients with terminal cancer suffer needlessly because doctors cannot prescribe medication due to the misapplication or misunderstanding of the UN drug conventions.

The World Health Organisation “Access to Controlled Medicines Programme” is a step in the right direction.

But we must make sure that access to the essential medicines on the WHO model lists does not become a casualty of the “drug war”.

The recent attempt to schedule ketamine, a drug recommended by WHO “to ensure safe and affordable surgical care” and used widely in the poorest areas of the world, would have been a backwards step.

I hope that evidence-based decision making on drug policies will prevail.

Sadly, drug policy has never been an area where evidence and effectiveness of policies have led the way.

Obviously, we all want to protect our families from the potential harms of drugs.

But if they do develop a drug problem – that is a chronic relapsing illness as the WHO has defined it – they should be viewed as patients in need of treatment and not as criminals.

In what other areas of public health do we criminalise patients in need of help?

Surely it cannot be the job of the criminal justice system to prescribe remedies to deal with public health concerns.

This is the job of public health professionals.

And the UNODC Executive Director Yury Fedotov has said, “the conventions are not about waging a “war on drugs” but about protecting the “health and welfare of mankind”.

We should focus on that objective.

The current drug policies are not achieving that goal.

So the question is: what policies would enable governments and health authorities to counter and reduce the social and health harms that drug use can cause?

If I may, I would like to make three suggestions.

First, decriminalize drug use. Punitive measures do not work and put lots of people in prison where their drug use may actually get worse.

The West Africa Commission on Drugs, which I convened, did not find a single treatment centre in that region which meets international minimum standards.

Fortunately Senegal and some other countries are now opening new facilities; donors should help to expand such facilities throughout the region.

Third, we need to learn how to live with drugs so they cause the least possible harm. Even though we would like a “drug-free world”, this is not a realistic ambition.

Tobacco is an example of how a dangerous and addictive product is being regulated because we know that it cannot simply be outlawed.

As a result, the number of people who are addicted to cigarettes and tobacco has gone down in a large number of countries.

And this happened without anyone being arrested or put in jail or sent to a “treatment program” by a prosecutor or a judge. It was achieved through higher taxes, restrictions on sale and use and effective anti-smoking campaigns.

It was Regulation and education that led to this result.

We need to regulate drugs because they are risky.

Drugs are infinitely more dangerous when produced and sold by criminals who do not worry about any safety measures.

Legal regulation protects health. Consumers need to be aware of what they are taking and have clear information on health risks and how to minimize them.

Governments need to be able to regulate vendors and outlets according to how much harm a drug can cause.

The most risky drugs should never be available “over the counter” but only via medical prescription for people registered as dependent users, as is already happening here in Switzerland.

For some time, the Global Commission on Drug Policy, of which I am a member – and I see other members in the room: Michel Katzachkine and of course the moderator Ruth Dreifuss, has been encouraging an open, forward looking discussion of these issues in the run up to the General Assembly Special Session in 2016.

I am happy to see so many of you hear to join the debate.

We believe that WHO, which is one of the four treaty bodies of the international drug conventions, should play a major role in that debate.

Drug policies should be grounded in scientific evidence and a deep concern for health and human rights.

That is why we strongly believe the time is right for a smarter, health-based approach to drug policy.

I fervently hope that UNGASS 2016 will focus on the real issues and take us in the direction that I think we ought to go.

Your ticket for the: Speech of Commissioner Kofi Annan, 68th World Health Assembly