The Global Commission on Drug Policy    ⁄    Opinions, interviews and articles    ⁄    WAR ON DRUGO Short animation film explains the failure of the war on drugs, takes the debate mainstream

WAR ON DRUGO Short animation film explains the failure of the war on drugs, takes the debate mainstream

Movie was commissioned by the Global Commission on Drug Policy, developed by Almap/BBDO agency and produced by Vetor Zero studio in Brazil. 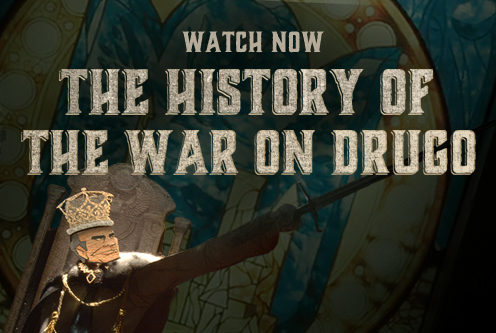 In a fairytale setting, the movie explains the disastrous war on drugs by telling the story of a dragon banished from an ancient kingdom, and how people that spent time with the dragon were thrown in jail. The visually appealing metaphor uses a simple narrative that is likely to help break the taboo on this complex subject and disseminate the argument to an even wider international audience. The key messages of the movie are: prohibition does not mean control, and criminalization generates violence and suffering. A Drugo-free-world maybe a utopia, but a society with less violence is something that can be achieved.

WAR ON DRUGO is part of an ongoing effort by the Global Commission on Drug Policy (GCDP) to highlight the need for more humane, evidence-based policies to deal with drugs in our society (1). The GCDP is the most distinguished group to call for broad reform of drug policies, and includes seven former presidents, the entrepreneur Richard Branson, former UN secretary-general Kofi Annan, and other international leaders.

“Beyond the political and expert debates, we need to help inform the public on what the issues are related to drugs, and what alternatives we have to deal with this issue – hence the movie WAR ON DRUGO”, said Fernando Henrique Cardoso, former president of Brazil and chair of the GCDP. “WAR ON DRUGO is a tool that will allow us to outreach to the majority of the people who are not engaged in the debate at a technical level, to show them that we need to open our eyes and realize that we can’t solve this problem in a simplistic way. Let’s be smart about how we deal with drugs.”

Since 2011, the GCDP has been advocating a paradigm shift on drug policy with the publication of evidence-based reports and participation at high-level political fora. It’s been more than four decades  since a war was declared on the production and use of substances such as cannabis and cocaine, and trillions of dollars have been invested in combating their use. Yet, illicit drug consumption continues to rise around the world. Furthermore, prohibition has had severe negative consequences such as mass incarceration, the growth of criminal organizations, corruption and the spread of infectious diseases such as HIV/AIDS and Hepatitis.

At a press conference in New York City on Tuesday, September 9, the GCDP will release Taking Control: Pathways to Drug Policies that Work, a groundbreaking new report.The report reflects a new evolution in the thinking of the Commissioners, who are set to become the most distinguished group of high-level leaders to call for far-reaching, concrete changes to global drug policy. The event will be streamed live on the Global Commission’s website.(2)

From a technical perspective, the creative and logistical processes behind WAR On DRUGO were challenging. The agency behind the idea is Brazilian Almap/BBDO.

Award-winning art director Marcello Serpa said: “For more than 40 years, communications on this issue has been used as another weapon in the War on Drugs. Campaigns vilifying substances and users have not helped to change the ever growing level of consumption and brutal violence deriving from prohibition. Millions of dollars have been spent trying to “dry ice.” We need to change the narrative to break the taboo around the issue. If DRUGO helps to create a public discussion on the consequences of the War on Drugs, and thus create conditions for positive political change, this movie will have fulfilled its role.”

Vetor Zero and Lobo, the producers in charge, mobilized a team of more than 60 people over a 9-month production period. Composing the animation demanded more than 31,200 pictures be taken, and 4,320 finalized frames for a total of 3 minutes of film. Of the 310 characters that were physically built, 83 were manually animated across 13 different scenarios. The results came after 41,000 working hours. (2)

(1) The GCDP has already published 3 reports addressing the impacts of the criminalization of drug use and the lack of focus on public health. The reports are available for download at www.globalcommissionondrugs.org. In June 2014, the Global Commission on Drug Policy launched a series of online ads to support ongoing public engagement and civil society initiatives and open a dialogue with the public. The campaign can be seen at www.needtotalkaboutdrugs.com

(2) For more details on the report launch and press conference please contact Tony Newman at tnewman@drugpolicy.org

Your ticket for the: WAR ON DRUGO Short animation film explains the failure of the war on drugs, takes the debate mainstream

WAR ON DRUGO Short animation film explains the failure of the war on drugs, takes the debate mainstream