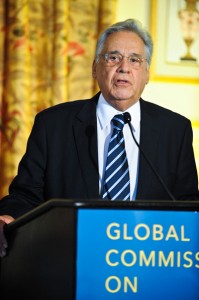 A sociologist trained at the University of São Paulo, he emerged since the late 1960s as one of the most influential intellectuals in Latin America. Cardoso was deeply involved in Brazil’s struggle for democracy to overcome the authoritarian military regime (1964-1985). Elected Senator in 1982, he was a founding member of the Party of the Social Democracy (PSDB). He served as Minister of Foreign Relations in 1992/93 and Minister of Finance in 1993/94.

Former Full Professor of Political Science, to-day Professor Emeritus, at the University of São Paulo, he was professor at the universities of Santiago de Chile, of California (at Stanford and at
Berkeley), of Cambridge (United Kingdom), of Paris-Nanterre, as well as at the École des Hautes Études en Sciences Sociales and the Collège de France. He has earned more than 20 Honoris Causa degrees from some of the most famous universities. Foreign Honorary Member of the American Academy of Arts and Sciences. He was awarded honours such as the “Prince of Asturias Award of International Cooperation 2000”, the UNDP’s 2002 inaugural “Mahbub ul Haq Award for Outstanding Contribution to Human Development” and the “J. William Fullbright Prize for International Understanding” (2003).

His main works in English include The Accidental President of Brazil (2006, with B. Winter), Charting a New Course: The Politics of Globalization and Social Tansformation (2001, M.Font editor) and Dependency and Development in Latin America (with E. Faletto, 1979).