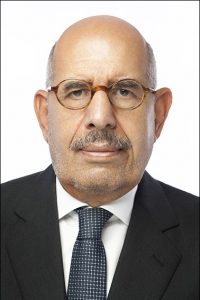 He had been an IAEA staff member from 1984, holding a number of high-level legal and policy positions, including that of Legal Adviser and subsequently Assistant Director General for External Relations.

Dr. ElBaradei was born in Cairo, Egypt, in 1942, son of the late Mostafa ElBaradei, a lawyer and former President of the Egyptian Bar Association. He gained a Bachelor’s degree in Law in 1962 at the University of Cairo, and a Doctorate in International Law at New York University School of Law in 1974.

From 1974 to 1978 Dr. ElBaradei was a special assistant and legal advisor to the Foreign Minister of Egypt, in which capacity he took part in various presidential and ministerial delegations.

In October 2005, Dr. ElBaradei and the IAEA were jointly awarded the Nobel Peace Prize “for their efforts to prevent nuclear energy from being used for military  purposes and to ensure that nuclear energy for peaceful purposes is used in the safest possible way”. In its citation, the Norwegian Nobel Committee referred to the IAEA´s work as being of “incalculable importance”, and referred to Dr. ElBaradei as an “unafraid advocate” of new measures to strengthen the nuclear non-proliferation regime.

In December 2009, Dr. ElBaradei has been appointed Director General Emeritus of the IAEA. Starting in 2010, Dr. ElBaradei became a prominent advocate for democratic change in Egypt and the promotion of freedom and social justice. He is an adjunct professor of Law at Cairo University School of Law and has been a board member of many associations, commission and universities, including: Global Citizenship Commission; Transparency International; the International Crisis Group; the Coalition of Dialogue on Africa; the Global Economic Symposium; the American University in Cairo; the United Nations High Level Commission on HIV Prevention.

Dr. ElBaradei is married to Aida ElKashef, an early childhood teacher. They have a daughter, Laila, a lawyer, married to Neil Pizey, an investment banker – who live in London – and a son, Mostafa, an IT manager, who lives in Istanbul. They have two granddaughters: Maya and Nina.