The Global Commission on Drug Policy    ⁄    Opinions, interviews and articles    ⁄    Coverage of our 2019 report in The Economist: “What is the most dangerous drug?”

Link to article in The Economist

What is the most dangerous drug? 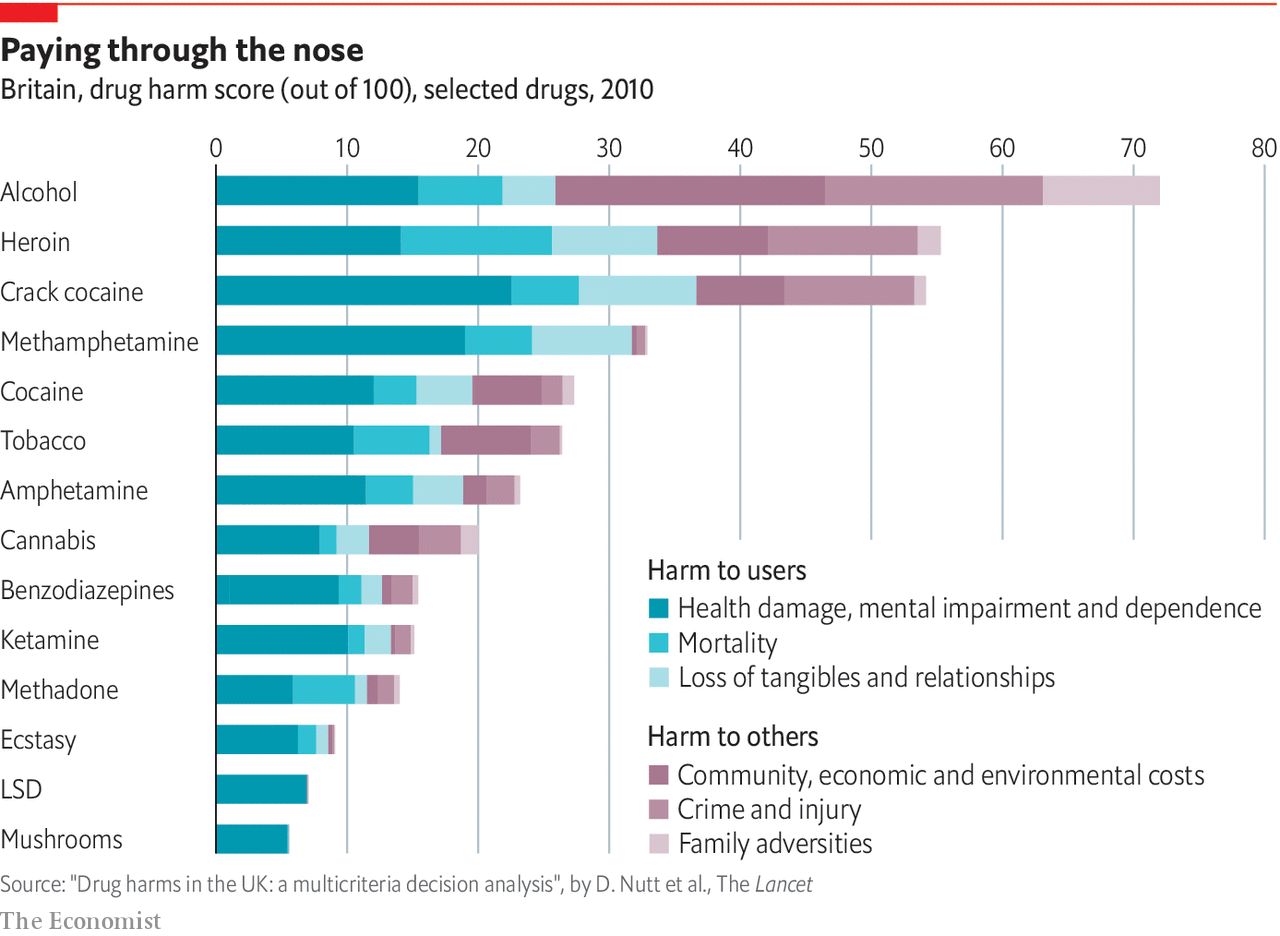 WHY IS ALCOHOL legal but many other intoxicants not? That question is the subject of a report published today by the Global Commission on Drug Policy, an independent group of 26 former presidents and other bigwigs. They conclude that, as far as the scientific evidence is concerned, current drug laws have no rhyme or reason to them. The commission blames the UN’s drug classification system, which sorts some 300 psychoactive substances into “schedules” according to their harms and benefits. Some, such as morphine, have medical uses. Others, such as psilocybin (the active ingredient in magic mushrooms), are used mostly recreationally. Drugs without any apparent medical utility are automatically placed in the most dangerous category—and subjected to the strictest criminal penalties—regardless of the risk they pose.

The flaws of the UN’s system have been evident for years. In 2010 a group of British drug experts ranked 20 popular intoxicating substances on 16 physical, psychological and social harms, including those done to non-users, such as crime and family breakdown. Alcohol came out as the most harmful, followed by heroin and crack cocaine. Psychedelic “party” drugs, including ecstasy, LSD and mushrooms, were deemed mostly benign—with harm scores less than half that of tobacco—despite being lumped with cocaine and heroin in the UN’s classification system. This ranking is not without its own idiosyncrasies, many of which reflect how drugs are currently used and regulated. Alcohol’s position at the top is partly the result of its widespread use, which causes greater harms to others (crack cocaine is considered the most harmful drug for the user). Drugs such as heroin, meanwhile, would be ranked lower if users could always buy an unadulterated dose, and did not have to resort to sharing needles.

Designing laws for drugs that are consistent with their dangers and benefits requires predicting how drug markets will respond. Difficult as that may be, it is the way forward, argues the Global Commission. The zero-tolerance approach adopted by many governments has led to a host of social problems, including soaring prison costs and ill-health. “It is past high time to accept the fact that a society without drugs is an illusion,” the report argues. Regulating drugs in a more sensible manner would make them safer—and not just for those who take them.
2019 report, classification of drugs, Economist

Your ticket for the: Coverage of our 2019 report in The Economist: “What is the most dangerous drug?”