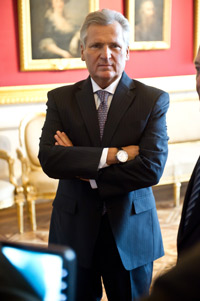 Former president of Poland Aleksander Kwasniewski has joined the Global Commission on Drug Policy to help the reform of ineffective and harmful drug laws. He is the fifth president to join the Commission, along with Cesar Gaviria of Colombia, Fernando Henrique Cardoso of Brazil, Ruth Dreifuss of Switzerland, and Ernesto Zedillo of Mexico.

“While Central Europe continues to struggle with how to effectively respond to drug problems, many countries east of Poland face the serious challenges of increases in drug consumption and overdose deaths from illicit drugs” said President Fernando Henrique Cardoso, chair of the Commission. “Due to the small scale or total lack of evidence-based harm reduction and treatment policies, they are experiencing the rapid spread of HIV and AIDS. By accepting our invitation to join, Mr. Kwasniewski becomes our key interlocutor in the region and significantly expands the global outreach of the Global Commission”, said Cardoso.

“We intended to decrease drug use among youth, but our harsh approach only caused more harm to families,” said Kwasniewski when explaining his 2000 decision to criminalize personal possession of any amount of illicit substances which resulted in a number of negative, unintended consequences. “I hope other countries will look at the evidence and learn from our mistakes.”

A report by the Institute of Public Affairs, a Polish think-tank, evaluated the costs and effectiveness of the 2000 drug law. It estimated that the criminalization of the possession of any amount of drugs, regardless of intentions, cost Polish taxpayers more than 80 million Polish zloty a year (about 20 million euro). Despite such high costs, the results of this repressive policy did not prevent people from using illicit drugs or result in increased arrests of drug traffickers. To the contrary, the 2000 law only led to more arrests of young people who use cannabis (52 percent of arrests under the law were of people aged 24 and younger). Recently, Poland revised its highly restrictive drug laws, with President Kwasniewski as one of the prominent supporters
for reform.

“Government leaders need to move beyond the drug war rhetoric and take a closer look at evidence-based approaches that reduce the harms associated with drug use,” said Kasia Malinowska-Sempruch, director of the Global Drug Policy Program at the Open Society Foundations. “Many countries in Central and Eastern Europe are struggling with HIV epidemics propelled by injection drug use, and this is a particularly grave concern in Russia and Ukraine. We hope our neighbors in the east will join Poland in discussions about drug policy reforms that more effectively meet public health challenges.”