“Hey, We Need to Talk About Drugs” online ads launched in coordination with Support, Don’t Punish campaign on June 26th

June 24th, 2014 – Today, The Global Commission on Drug Policy (GCDP)  a group of distinguished international leaders including seven former presidents – is launching the campaign, “Hey, We Need to Talk About Drugs”. A series of advertisements addressing key facts and recommendations around the failure of the War on Drugs and the growing political debate on alternatives to approaching the issue.

The advertisements, featuring strong black and white photographs and five core messages, can be found on www.needtotalkaboutdrugs.com. Created for wide online use to support ongoing efforts and advocates of drug policy reform, the ads are being translated and adapted to different national scenarios without losing their global meaning. (1)

With the aim to strenghten ongoing social awareness and human rights advocacy efforts, the “Hey, We Need to Talk About Drugs” outreach strategy is being launched in coordination with the Support, Dont’Punish campaign and its 2014 Global Day of Action on June 26th.

The United Nations celebrates June 26th as the International Day against Drug Abuse and Illicit Trafficking – many governments use this date to promote the war on drugs, violent repression and harsh punishments. By using this day to hold a “Global Day of Action”, the Support Don’t Punish campaign counters this narrative and calls for an end to the War on Drugs and for more effective and humane approaches based on public health and human rights. Demonstrations, concerts, billboards and other actions are planned to take place in cities across the globe including London, Moscow, Kuala Lumpur, Mexico City, Paris, Bogota, Bangkok, New York, Budapest and Dakar. (2)

In 2011, the GCDP broke the taboo and published its first evidence-based report illustrating the failure of the repressive model and the need to look for alternatives to reduce the social harms of drug abuse while dealing with violence and corruption. Since then, the Comission has been advocating for drug policy reform at the highest political and public fora and published two other technical reports, showing the links between the criminalization of drug use and the spread of HIV and Hepatitis C epidemics in several parts of the world. The “Hey We Need to Talk About Drugs” campaign is a step forward on broadening this debate, something it intends to continue beyond 26th June.

Over the last 3 years, a dynamic political process has been set in course with Latin American countries such as Uruguay, Colômbia, Mexico and Guatemala taking the lead on voicing the need to as well as changing the approach to drug control. Moreover, the cannabis regulation process happening in the  US states has further pushed the public perception on the inefficiency of the current regime. This has resulted in the convening of a UN General Assembly Special Session on Drugs to happen in 2016. Such high level meetings to discuss the international system on drugs has not happened since 1998 and may represent a major paradigm shift on the 50 year old consensus that underlines the War on Drugs.

As commissioners Ruth Dreifuss, former president of Switzerland, and Jorge Sampaio, former presidente of Portugal, recently stated on a editorial: , “To enable concrete reforms to take place at the global level in the near future, the time for action is now. Raising global awareness remains the main challenge ahead as we move on towards the 2016 UN Summit on Drugs. Strong leadership and intensive collaborative action in the international arena toward a paradigm shift in drugs policy is driving change, as well as global advocacy at grass roots level — such as the “Support. Don’t Punish” campaign. Let’s use the upcoming International Day against Drug Abuse and Illicit Trafficking, celebrated on June 26, to speak out, call on reforms, push for a new global drug strategy, and speak smart on drugs. Let’s help now to turn the tide.”(3) 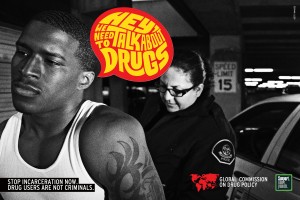 (1) The advertisements have been specially developed for the Global Commission on Drug Policy by Almap/BBDO agency in Brazil, under the direction of Marcello Serpa. They

(2) Details on the Support Don’t Punish activities can be found at http://supportdontpunish.org/day-of-action-2014/

campaign, Hey, we need to talk about drugs

Your ticket for the: Global Commission on Drug Policy joins day of action calling for an end to criminalization of drug use