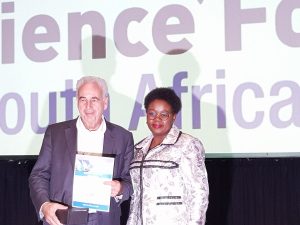 The members of the Global Commission on Drug Policy wish to extend their congratulations to their fellow Commissioner Michel Kazatchkine, who received South Africa’s International Science Diplomacy Award for Lifetime Contribution to tackling HIV/AIDS.

Presented by the Minister of Science and Technology at the Science Forum South Africa on 14 December, this award recognizes Michel Kazatchkine’s outstanding achievements and his global contributions to harnessing science, technology and innovation for international peace, solidarity and sustainable development. This prize recognizes particularly his commitment to enhancing life-saving harm reduction services, in particular those central to drug policy and specifically in low- and middle-income countries.

Former Executive Director of the Global Fund to fight AIDS, Tuberculosis and Malaria from 2007 to 2012, Michel Kazatchkine is a Professor of medicine who has spent nearly 30 years fighting AIDS as a leading physician, researcher, administrator, advocate, policy maker and diplomat. He served as Director of the National Agency for Research on AIDS and Hepatitis (ANRS) in France (1998-2005), Chair of the World Health Organization’s Strategic and Technical Advisory Committee on HIV/AIDS (2004-2007), member of the WHO’s Scientific and Technical Advisory Group on tuberculosis (2004-2007), French Ambassador on HIV/AIDS and communicable diseases (2005-2007), and UN Special Envoy on HIV/AIDS in Eastern Europe and Central Asia (2012-2017).

“Michel has worked tirelessly throughout his career to raise awareness about HIV/AIDS, in particular drawing attention to the increased risks of transmission in closed settings and for marginalized and vulnerable populations, such as people who inject drugs, who do not receive the appropriate harm reduction services,” says Ruth Dreifuss, former president of Switzerland and Chair of the Global Commission on Drug Policy. “I extend my warmest congratulations to Michel for receiving this award, in recognition of his commitment and pragmatism in addressing not only the medical but above all the human aspects of HIV/AIDS.”