The Eastern and Central European and Central Asian Commission on Drug Policy (ECECACD) was established in November 2021 by a group of high-level leaders, including former heads of State, politicians, scientists, diplomats and philanthropists from the region.

The Commissioners are regional leaders from different professional arenas who have come together inspired by the urgent need to advocate for drug policies based on scientific evidence, human rights, public health and security.

Please find below a list of our commissioners and publications.

The ECECACD has developed three background publications..These publications provide comprehensive information about current patterns of drug production, trafficking and consumption in the region, about prevailing drug policy approaches in the region and their consequences, and on public narratives on drugs and drug use in the region. The publications also contain recommendations on each of the respective issues, which can be implemented by governments in the region. 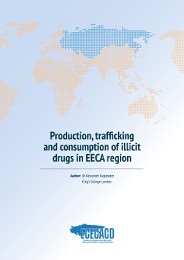 Production, trafficking and consumption of illicit drugs in the EECA region (2021) 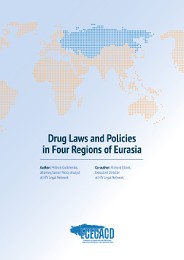 Drug laws and policies in four regions of Eurasia (2021) 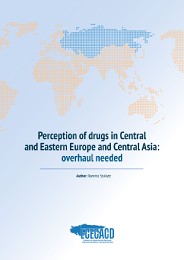 Perception of drugs in Central and Eastern Europe and Central Asia: overhaul needed (2021) 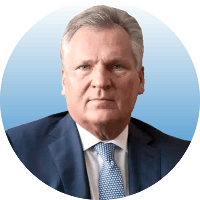 Aleksander Kwaśniewski is a former President of Poland, and served for two successive terms from 1995 until 2005. Aleksander Kwaśniewski was a member of the Polish United Workers’ Party (PZPR) from 1977 until its dissolution in 1990. He was particularly active in the student movement, and worked as the editor-in-chief of the student weekly ITD magazine from 1981 until 1984, and of Sztandar Młodych from 1984 to 1985. Mr. Kwaśniewski participated in the famous “Round-Table” negotiations that finally brought the peaceful transformation of Poland and the wider Central and Eastern Europe region from communism to democracy. Once the Iron Curtain had fallen, he co-founded the Social Democratic Party of the Republic of Poland (SdRP) and became its first Chairman.

Aleksander Kwaśniewski won the Polish presidential elections in December 1995. One of his first great achievements was to bring about a new democratic Constitution in Poland, which became effective in July 1997. He was re-elected in 2000 for a second and final five-year term. During his Presidency, he played a key role in the reconciliation between the Poles and the German, Jewish and Ukrainian people. He further inspired the international mediation efforts during the 2004 Orange Revolution in Ukraine, helping the young democracy to prevail. Finally, he also was a strong advocate of EU and NATO integration, and ensured that Poland joined both institutions during his tenure

Mr. Kwaśniewski was appointed Distinguished Scholar in the Practice of Global Leadership at Georgetown University, USA, where as a visiting faculty member he taught for several years at the Edmund A. Walsh School of Foreign Service. Until November 2013, Mr. Kwaśniewski co-led the European Parliament monitoring mission in Ukraine to monitor the criminal cases against Yulia Tymoshenko, Yuriy Lutsenko and Valeriy Ivaschenko. He is Founder of the Amicus European Foundation, member of the Atlantic Council of the United States, Chairman of the Board of Yalta European Strategy, a member of Club de Madrid, a member of the Supervisory Board of Babyn Yar Holocaust Memorial Center, and a member of the Global Commission on Drug Policy. Since 2019, Mr. Kwaśniewski is also a member of the International Advisory Council (IAC) to Uzbekistan. In 2021, he became the Chair of the Eastern and Central European and Central Asian Commission on Drug Policy (ECECACD). 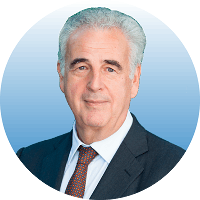 Professor Michel Kazatchkine MD has over 35 years’ of experience in global health as a leading physician, researcher, administrator, advocate, policymaker and diplomat. He attended medical school in Paris and completed postdoctoral fellowships at St. Mary’s Hospital in London and Harvard Medical School. He is Emeritus Professor of Immunology at René Descartes University in Paris, and has authored or co-authored over 500 scientific publications.

Professor Kazatchkine has played key roles in various organizations, serving as Director of the National Agency for Research on AIDS in France, and as the French Ambassador on HIV/AIDS and communicable diseases. In 2007, he was appointed as the Executive Director of the Global Fund to Fight AIDS, Tuberculosis and Malaria, a position in which he served until March 2012. Between 2012 and 2017, Professor Kazatchkine then served as the UN Secretary-General’s Special Envoy on HIV/AIDS in Eastern Europe and Central Asia. Since 2018, he is the Special Advisor to the Joint UN Programme on HIV/AIDS (UNAIDS) for Eastern Europe and Central Asia. He is also a Senior Fellow with the Global Health Centre of the Graduate Institute for International and Development Studies in Geneva, and a member of the Global Commission on Drug Policy.

Professor Kazatchkine holds Honorary Degrees from Imperial College London, the Free University of Brussels, the Catholic University of Louvain, and the University of Geneva. He is an Officer of the Légion d’Honneur in France, and the recipient of several other national orders and national and international awards. 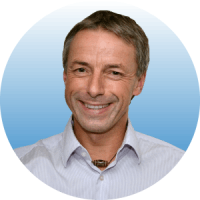 Dr. Pavel Bém is a Czech politician, a former member of the Chamber of Deputies of the Parliament of the Czech Republic, and a former Mayor of both the City of Prague and the Prague 6 District.

He is currently also a member of the National Drug Commission within the Office of the Government of the Czech Republic, and an advisor to the Prime Minister on drug issues.

Pavel Bém studied medicine at Charles University in Prague, specializing in psychiatry and subsequently devoting most of his career to drug abuse prevention, treatment and drug policy. He is one of the founders of the Czech drug policy and a pioneer in developing the public health-oriented drug policy in former Czechoslovakia as well as in other countries of Central and Eastern Europe, Asia and Latin America. Dr. Bém served many years as a Czech “Drug Tzar” (National Drug Coordinator). He spent 20 years in various policy roles and high management functions at international, national as well as local levels, focusing mainly on the development of cost-effective public health strategies and harm reduction services. He has served for various governmental as well as international bodies (such as the EU, UN, WHO, Council of Europe, Pompidou Group, and the PHARE Programme).

He was twice elected as a Vice-President of the Committee of the Regions of the European Parliament. As a Member of the Czech Parliament, he has successfully submitted and introduced the national law relating to medical cannabis.

Since 2012, Pavel is also a member of the Global Commission on Drug Policy, a self-constituted body of former Presidents, Head of States, politicians and other high-profile individuals aiming to end the war on drugs, and to introduce more humane drug policy reforms throughout the world.

Currently, he also serves as a trainer, clinician and teacher at the 1st Medical Faculty of the Charles University (Prague), and as Head of the Department for Psychotherapy and Family Therapy at the Addictology Clinic. He works as a supervisor certificated by the European Association for Supervision (EAS).

His other interests include extreme skiing, scuba diving, piano playing and mountaineering: he has climbed four of the 14 mountains that are higher than 8,000 metres above sea-level – including Mount Everest and K2. 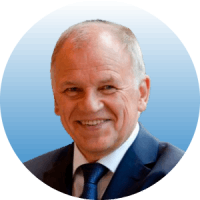 Dr. Andriukaitis served as European Commissioner for Health and Food Safety from 2014 until 2019, and was also a practicing surgeon for more than 20 years. He is the co-author of the Constitution of the Republic of Lithuania, and served as an MP for six mandates. He also led the Lithuanian delegation to the Convention on the Future of Europe, and was the Minister for Health from 2012 until 2014. 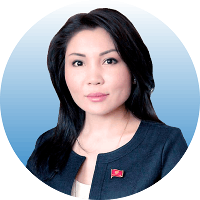 Elvira Surabaldieva was the Vice-Prime Minister of Kyrgyzstan on Social Affairs (2020-2021), and has been a Member of Parliament and a member of the Social-Democrat Party of Kyrgyzstan from 2015 to 2020. Elvira worked at the Parliamentarian Committee on Economic and Fiscal Policy, and was a member of the Kyrgyz delegation to the Parliamentary Assembly of the Council of Europe (PACE). She also worked at the Social Fund of the Kyrgyz Republic from 2004 to 2006. Elvira graduated from the University of Bristol (UK) in 2003, and is a specialist in international relations. 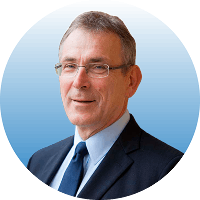 Andris Piebalgs has served the European Union as Commissioner for Energy (2004-2009) and then as Development Commissioner (2010-2014). Under his leadership, a new European Commission development policy – ‘Agenda for change’ – was adopted with a prominent focus on nutrition. He also served on the High-level Panel on the Post-2015 Development Agenda (2012-2013), an advisory board established by UN Secretary General to develop a new global development agenda. He was a key figure in the formation of the EU’s sustainable energy policies.

Mr. Piebalgs has been a prominent Latvian politician and diplomat, and was instrumental in Latvia’s accession to the EU. He is a Professor at the European University Institute, and is the Chairman of the Board of Appeal of the Agency of the Cooperation of Energy Regulators. He is a member of the Board of Trustees of Friends of Europe, and a Board member of the Friends of the Global Fund Europe. He is a graduate in physics from the University of Latvia. 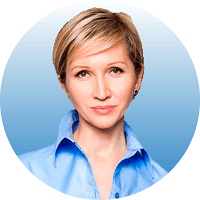 In 2003, Olena Pinchuk founded the first and only charity to commit private funds towards fighting against the HIV/AIDS epidemic in Ukraine. The main areas of focus for the Olena Pinchuk Foundation are: the fight against HIV/AIDS; the promotion of healthy lifestyles; mentoring and educational projects aimed at young girls and women; and attracting the best international humanitarian expertise to Ukraine. The Olena Pinchuk Foundation has cooperated with the Clinton HIV/AIDS Initiative, the Elton John AIDS Foundation and the Global Business Coalition on HIV/AIDS.

Olena is a daughter of the second President of Ukraine, Leonid Kuchma. She also chairs the Supervisory Board of StarLightMedia, the biggest media holding in Ukraine. StarLightMedia supports campaigns against HIV/AIDS and has so far has invested USD 80 million into this cause. She was named amongst the top women leaders of the year by La Tribune in 2010, and was a member of UN High-Level Commission on HIV Prevention.