The Latin American Commission on Drugs and Democracy was convened by former presidents Fernando Henrique Cardoso of Brazil, César Gaviria of Colombia and Ernesto Zedillo of Mexico and composed of 17 independent personalities. The Commission evaluated the impact of the “war on drugs” policies and framed recommendations for safer, more efficient and humane policies. The proposals presented in its Statement represented an in-depth paradigm shift in the strategy to deal with the drug problem in Latin America. 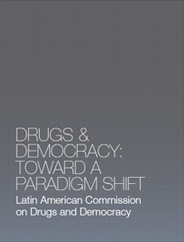 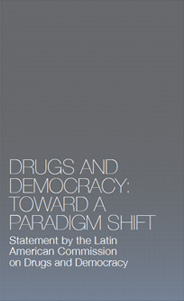 Ana María Romero de Campero (29 June 1941 – 26 October 2010[1]) was a Bolivian journalist, writer, activist and influential public figure in her country. She was the first Human Rights Ombudswoman (Defensor del Pueblo) (1998–2003) of Bolivia and President of the Senate of Bolivia at the time of her death. Ana María Romero dedicated her life to promoting democracy and human rights with particular regard for those most disadvantaged in Bolivian society.

Aurelijus Rūtenis Antanas Mockus Šivickas (born 25 March 1952) is a Colombian mathematician, philosopher, and politician. He has a master's degree in philosophy from the Colombian University, Universidad Nacional de Colombia, and a Honoris Causa PhD from L’université de Paris.

Diego García-Sayán Larrabure (born in Brooklyn, New York on August 2, 1950), is a former Justice and Foreign Affairs Minister of Perú, and currently a sitting judge on the Inter-American Court of Human Rights after having presided over it in the period from 2010 to 2014.

Enrique Krauze Kleinbort (b. September 17, 1947 in Mexico City), widely known as Enrique Krauze, is a Mexican public intellectual, historian, essayist, critic, producer, and publisher. He has written numerous books about the Mexican Revolution and leading figures in Mexican history, as well as economic analysis of the nation's history.

Enrique Santos Calderon (Bogota, December 7, 1945) is a Colombian journalist and writer. For nearly four decades he wrote the "Contraescape" column, published weekly in the newspaper El Tiempo, which was its director between 1992 y 2009. Was one of the creators of the Alternative magazine in the 70s of the century XX.

General Alberto Cardoso graduated from aspiring-to-infantry officer in 1962, the Military Academy of Agulhas Negras (AMAN) and has held several prominent positions throughout his military life. He was Chief Minister of the Institutional Security Cabinet during the two terms of President Fernando Henrique Cardoso. He ended his military career in the chief function of the Department of Science and Technology of the Army.

João Roberto Marinho (Rio de Janeiro, September 16, 1953) is a Brazilian businessman, Chairman of the Editorial Board and vice president of the Globo Organizations. He is the third of four children of the deceased communications tycoon Roberto Marinho(1904-2003).
João Roberto began his career as a journalist for the newspaper "O Globo". In the mid-1990s the Globo Organizations moved its command to the three sons of Roberto Marinho. According to Forbes 2015 World Billionaire's list, Marinho was placed at number 165 with an estimated net worth of $8.2 billion.

Mario Vargas Llosa was born in Arequipa, Peru. He studied two years in Leoncio Prado Military Academy in Lima after having lived in Bolivia and Piura. While studying at the Universidad Nacional Mayor de San Marcos, Vargas Llosa married Julia Urquidi. Vargas Llosa had seven jobs at the same time to earn a living. In 1959 he obtained the Javier Prado Scholarship and traveled to Spain where he obtained a PhD from the Complutense University of Madrid. He then moved to Paris where he intensified his literary work. In 1963 he published The Time of the Hero, which was met with great acclaim. He was soon hailed as one of the main exponents of the Latin American literature boom alongside Julio Cortazar, Carlos Fuentes and Gabriel Garcia Marquez. In 1964 he returned to Peru and divorced Julia Urquidi. He supported the Cuban Revolution until he became disenchanted. In 1965 he married Patricia Llosa, with whom he has three children.

In the following years Vargas Llosa continued to produce impressive works including The Green House, Conversation in the Cathedral, Captain Pantoja and the Special Service, Aunt Julia and the Scripwriter, The War of the End of the World. In 1987 he emerged as a political figure after leading the opposition to the nationalization of banks proposed by President Alan Garcia. In 1990 Vargas Llosa ran for President of Peru for the Democratic Front. After losing the Presidency in two close elections he returned to Europe. Since then he has produced celebrated works such as The Notebooks of Don Rigoberto, The Feast of the Goat, The Way to Paradise and The Bad Girl. He has also been a Visiting Professor or Resident Writer at prestigious universities such as Harvard, Oxford, Princeton, Columbia, Cambridge and Georgetown.

Moisés Naím (born July 5, 1952) is the former Minister of Trade and Industry for Venezuela and Executive Director of the World Bank. He is a Distinguished Fellow at the Carnegie Endowment for International Peace, an internationally syndicated columnist whose writings are published by leading papers worldwide, and the author of more than 10 books. In 2013, the British magazine Prospect listed Naim as one of the world's leading thinkers. In 2014 and 2015, Dr. Naím was ranked among the top 100 influential global thought leaders by GDI Gottlieb Duttweiler Institute for work in his latest book, The End of Power.

Attorney and Lawyer by the Faculty of Law of the University of Buenos Aires. Chamber Judge Oral Criminal Court.

Paulo Coelho de Souza (born August 24, 1947) is a Brazilian lyricist and novelist. He is the recipient of numerous international awards, amongst them the Crystal Award by the World Economic Forum. His novel The Alchemist has been translated into 80 languages. The author has sold over 200 million copies worldwide and is the all-time bestselling Portuguese language author.

Sergio Ramírez Mercado (born August 5, 1942 in Masatepe, Nicaragua) is a Nicaraguan writer and intellectual who served in the leftist Government Junta of National Reconstruction and as Vice President of the country 1985-1990 under the presidency of Daniel Ortega.

In 1977 Ramírez became head of the "Group of Twelve", a group of prominent intellectuals, priests, businesspeople, and members of civil society who publicly stated their support for the Frente Sandinista de Liberación Nacional (FSLN) in its struggle to topple the dictatorship of Anastasio Somoza Debayle. With the triumph of the Revolution in 1979, he became part of the Junta of the Government of National Reconstruction, where he presided over the National Council of Education. He was elected vice-president of Nicaragua in 1984 and was sworn in 1985. He is presently a columnist for several newspapers around the world, including El País, Madrid; La Jornada, Mexico; El Nacional, Caracas; El Tiempo, Bogota and La Opinion, Los Angeles; La Prensa y Magazine in Nicaragua. He also directs Carátula, an electronic Central American cultural magazine.

Sonia Picado Sotela. (San José (Costa Rica), December 20, 1936 -). It is a jurist, political and university professor of Costa Rica with a recognized expertise in the field of human rights. She has held senior positions at the Inter-American Human Rights System including: Internal Director, (1983-1984); Deputy Executive Director (1984 - 1987) and Executive Director (1987 - 1994) all of the Inter-American Institute of Human Rights.

Currently holds the presidency of the IIHR, it is the first woman to hold this position. Previously, he was also part of the Inter-American Court of Human Rights, which has been a judge and, from 1988 to 1994, Vice President. She is also a member of the Board on Human Security of the United Nations, the Court of Arbitration at The Hague and the Inter-American Dialogue. It has also been ambassador of Costa Rica to the government of the United States between 1994 to 1998 and Congress woman in the period 1998-2002 by the National Liberation Party. She held important struggles for gender mainstreaming to various bills and urged others to benefit Costa Rican women.

She has a proven track record in human rights advocate, especially in the promotion and strives to improve human rights of women.

He has published a number of books, one of which, Santa Evita, has been translated into 32 languages and published in 50 countries. He was awarded the Guggenheim and Woodrow Wilson fellowships, and won the 2002 Premio Alfaguara de Novela for the novel Flight of the Queen. His works deal primarily (but not exclusively) with Argentina during and after the rule of Juan Domingo Perón and his wife, Eva Duarte de Perón (Evita).

Your ticket for the: The Latin American Commission on Drugs and Democracy