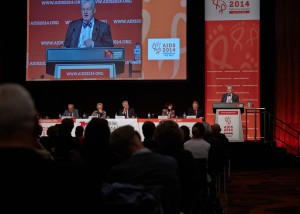 Tuesday July 22, 2014, Melbourne, Australia – Delegates to AIDS 2014, the 20th International AIDS Conference, were told today that decriminalisation of illicit drug use is a key measure for ending HIV transmission around the world.

One of the key sessions discussed the impact of drug policies on people who inject drugs, the spread of HIV and the co-morbidities of tuberculosis and hepatitis. During this session Global Drug Commissioner, Sir Richard Branson, who joined by video link, said the global war on drugs had failed both in terms of drug and public health outcomes, particularly in relation to HIV and hepatitis C, and that the time has come to replace the criminalisation and punishment of drug users with treatment and health care.

“Drug policy reform should not be seen in isolation” Sir Richard Branson said. “It has the potential to affect change in other areas such as the world’s chronically overcrowded penal system or of reducing the negative impact of policing on some communities.

“Globally, we’re using too much money and far too many precious resources on incarceration when we should be spending this money on education, vocational training, and in the case of drug users, on treatment, proper medical care and re-entry.”

Day two also included two key symposiums: one addressing youth leadership in the global HIV response; and another focussed on how better engagement with the science of HIV can improve access to HIV treatments.

This afternoon featured a symposium on HIV and sex workers based on work commissioned by the leading medical journal The Lancet. Several other panel discussions also took place on a range of subjects such as: improving the wellbeing of people with HIV by promoting safe drinking water, sanitation and hygiene; the pros and cons of biomedical and scientific advances in HIV prevention technology; and the HIV-related impact of anti-gay laws among men who have sex with men.

This evening, the AIDS 2014 Candlelight Vigil will take place to remember the 35 million people who have been lost as a result of HIV or AIDS related causes, and to celebrate the triumphs of science, medicine, policy and community in the fight against HIV and AIDS. Starting at 6pm at Federation Square, this moving event will take on extra significance as delegates honour the six conference delegates who were killed in the MH17 plane disaster.

The Vigil will follow the AIDS 2014 Conference ‘Mobilisation March’ though Melbourne’s city centre.

The Global Village, the conference’s international showcase of community related HIV programmes and activities, will continue to feature a range events including music and dance performances as well as Q&A sessions on young people and sexual health as well as the practice of HIV prevention in disaster and war zones.

All our videos including a daily wrap up from the Global Village are featured on the conference YouTube channel:

Non-permanent partners are the Positive Women’s Network and Sidaction.

The Australian based partners are: the Australian Department of Foreign Affairs and Trade; the Australasian Society for HIV Medicine (ASHM); and the National Association of people with HIV Australia (NAPWHA).

The Asia Pacific Partners are: The Asia Pacific Network of Sex Workers (APNSW); the AIDS Society of Asia and the Pacific (ASAP); and the National AIDS Research of India (NARI).

The International AIDS Society (IAS) is the world’s leading independent association of HIV professionals, with over 16,000 members from more than 177 countries working at all levels of the global response to AIDS. The IAS members include researchers from all disciplines, clinicians, public health and community practitioners on the frontlines of the epidemic, as well as policy and programme planners.

The IAS is custodian of the biennial International AIDS Conference and lead organizer of the IAS Conference on HIV Pathogenesis, Treatment and Prevention, which will be held in Vancouver, B.C., Canada, 19-22 July 2015.

Your ticket for the: Aids 2014 – Decriminalisation, prevention, human rights