The Global Commission on Drug Policy    ⁄    Opinions, interviews and articles    ⁄    Breaking with the past – a 21st century drug policy that works

Each year, hundreds of thousands of people die globally from preventable drug-related disease and violence. Millions of users are arrested and thrown in jail. Communities all over the world are blighted by drug-related crime. Citizens see huge amounts of their taxes spent on harsh policies which are not working.

But despite this clear evidence of failure, there remains a damaging reluctance across the world to consider a fresh approach. The Global Commission on Drug Policy is determined to help break this century-old taboo. Building on the work of the Latin American Commission on Drugs and Democracy, our first report – The War on Drugs – demonstrated how repressive approaches to containing drugs have failed.

We called on governments to adopt more humane and effective ways of controlling and regulating drugs. We recommended that the criminalization of drug use should be replaced by a public health approach. We also appealed for countries to test carefully models of legal regulation as a means to undermine the power of organized crime, which thrives on illicit drug trafficking.

There is, at last, some evidence of change. Statesmen from Colombia, Guatemala, Mexico and Uruguay have assumed the lead in initiating reforms to drug policy in their own countries. These efforts have had knock-on effects across the neighborhood. In 2013, the Organization of American States (OAS) issued a landmark report on drug policy proposing different scenarios, including alternative forms of drug regulation.

The findings of the Global Commission resonated across Europe as well. Many European states serve as a model for a health-oriented approach to drug policy. In several countries, evidence-based prevention, harm-reduction and treatment are endorsed – in sharp contrast to solely repressive approaches adopted in other parts of the world.

And now drug policy reform is going viral. Other regions are joining the debate about new and progressive ways of dealing with drugs. For example, in New Zealand, proposals are being drafted to regulate synthetic drugs. In West Africa, where drug trafficking and organized crime is threatening democracy and governance, brave leaders have launched a West African Commission on drug trafficking and its consequences.

Even the United States, among the staunchest of all prohibitionist states, is enacting new approaches to drug policy. For the first time, a majority of Americans support regulating cannabis for adult consumption. And in Colorado and Washington states, new bills were approved to make this a reality. There are signs that these experiences could multiply further still.

All countries will have an opportunity to review the international drug control regime in a few years’ time. There will a special session of the United Nations General Assembly in 2016, which will provide a great opportunity for an honest and informed debate on drug policy. Hopefully from that debate will flow drug policies informed by evidence of what actually works in practice rather than what ideology dictates in theory.

This opportunity must not be lost. In Vienna, where the international community regularly assembles to review progress on drug control, we urge enlightened leadership to ensure that the world looks forward and not simply to the past. We cannot remain locked into the old mantra that the war on drugs can be won if only there is more effort and expense.

The facts speak for themselves. It is time to change course. Governments must approach the UN review process with an open mind and a spirit of shared responsibility. We encourage governments to take a bold and pragmatic stand backed by good data and progressive values.

With a complex issue like drug policy, of course, there is no single simple answer or a one-size-fits-all solution. Countries must have the space to discuss, define and develop policies best tailored to their own realities and needs.

But the fact is that today we know what works and what does not. It is time for a smarter approach to drug policy. Putting people’s health and safety first is an imperative, not an afterthought.

Read here the OpEd in spanish 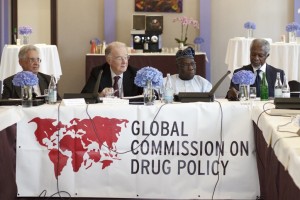 Your ticket for the: Breaking with the past – a 21st century drug policy that works