Drug War Policies in U.S., Russia, and China Cause Millions of Needless Infections – globally, 10 out of 16 million people who inject drugs have Hepatitis C.

Thursday, 30 May 2013, (Geneva, Switzerland)–A hepatitis C epidemic fuelled by the “war on drugs” is sweeping amongst injecting drug users globally, says a new landmark report released today by the Global Commission on Drug Policy. Of the 16 million people who inject drugs around the world, an estimated 10 million are living with hepatitis C. The report, entitled The Negative Impact of the War on Drugs on Public Health: The Hidden Hepatitis C Epidemic, condemns the drug war as a failure and recommends immediate, major reforms of the global drug prohibition regime to halt the spread of hepatitis C infection and other drug war harms.

The launch of the report happens in advance of next week´s 23rd International Harm Reduction Conference, taking place in Vilnius, Lithuania. Nearby Eastern Europe end Central Asia are home to the fastest growing hepatitis C and HIV epidemics and are largely being driven by injecting drug use.

The evidence-based document addresses how the global war on drugs is fuelling the hepatitis C pandemic among people who use drugs. Throughout the world, research has consistently shown that repressive drug law enforcement practices force drug users away from public health services and into hidden environments where hepatitis C and HIV risk become markedly elevated. Mass incarceration of nonviolent drug users also plays a major role in spreading the pandemic.

“Hepatitis C has to be one of the most grossly miscalculated diseases by governments on the planet,” said Commissioner Michel Kazatchkine, who is also the UN Secretary General´s Special Envoy on HIV/AIDS in Eastern Europe and Central Asia. “It is a disgrace that barely a handful of countries can actually show significant declines in new infections of hepatitis C among people who inject drugs”

The hepatitis C virus is highly infectious and easily transmitted through blood-to-blood contact. It therefore disproportionately impacts upon people who inject drugs, and is more than three times more prevalent than HIV among this population. In some of the countries with the harshest drug policies, over 90% of people who inject drugs are living with hepatitis C, with highest numbers reported in China (1.6 million people), the Russian Federation (1.3 million people) and the USA (1.5 million people).

The report launched today further describes the remarkable failure of drug law enforcement policies in reducing the global illicit drug market, noting that the worldwide supply of illicit opiates, such as heroin, has increased by more than 380% in recent decades. Moreover, the drug war contributes to the growth of organized crime, violence and to the wide-scale incarceration of nonviolent drug users.

The report also depicts how a country like Lithuania (with 2,8% of the general population and 80% per cent of the drug injection population infected) despite positive progress in terms of the Government´s free provision of hepatitis C treatment, is in fact only reaching 5% of those in need. In Ukraine, where 260,000 people who use drugs are infected with HCV, a National Hepatitis Program has recently been approved for the first time following intense advocacy efforts by civil society groups. Crucially, the price for treatments has been more than halved during negotiations with pharmaceutical companies.

“The war on drugs is a war on common sense”, said Commissioner Ruth Dreifuss, who is also the former President of Switzerland. “Repressive drug policies are ineffective, violate basic human rights, generate violence and expose individuals and communities to unnecessary risks. The Hepatitis C epidemic, totally preventable and curable, is yet another proof that the drug policy status quo has failed us all miserably.”

This is the third report published by the Global Commission, the most distinguished group of high-level leaders to ever call for drug policy reform, including alternatives to incarceration, greater emphasis on public health approaches to drug use, decriminalization and experiments in legal regulation of drugs. Released in June 2011, its first report, War on Drugs, generated unprecedented media coverage and catalyzed international debate about the urgent need for a paradigm shift on the global drug prohibition regime.  The second report, The War on Drugs and HIV/AIDS, was published in June 2012 in advance of the International AIDS Conference in Washington D.C. and was successful on exposing the links between the HIV pandemic and the criminalization of drug use. 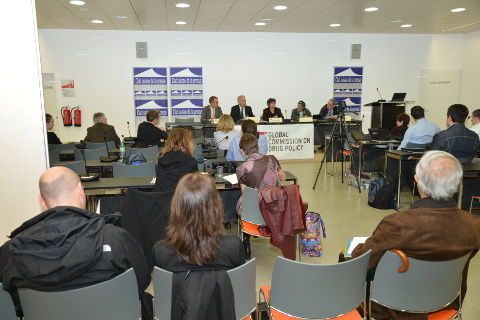 DOWNLOAD THE FULL REPORT AND WATCH VIDEOS WITH STATEMENTS FROM THE COMMISSIONERS: www.globalcommissionondrugs.org/hepatitis

The Negative Impact of the War on Drugs on Public Health: The Hidden Hepatitis C Epidemic

– Governments should publicly acknowledge the importance of the hepatitis C epidemic and its significant human, economic and social costs, particularly among people who use drugs.

– Governments must acknowledge that drug policy approaches dominated by strict law enforcement practices perpetuate the spread of hepatitis C (as well as HIV and other health harms). They do this by exacerbating the social marginalisation faced by people who use drugs, and by undermining their access to essential harm reduction and treatment services.

– Governments should therefore reform existing drug policies – ending the criminalisation and mass incarceration of people who use drugs, and the forced treatment of drug dependence.

– Governments must immediately redirect resources away from the ‘war on drugs’ and into public health approaches that maximise hepatitis C prevention and care, developed with the involvement of, the most affected communities.

– Drug policy effectiveness should be measured by indicators that have real meaning for affected communities, such as reduced rates of HIV and hepatitis transmission and mortality, increased service coverage and access, reduced drug market violence, reduced human rights violations, and reduced incarceration.

– Governments must remove any legal or de facto restrictions on the provision of sterile injection equipment and other harm reduction services, as well as opioid substitution therapy, in line with World Health Organisation guidance. It is critical that these services are delivered at the scale required to impact upon hepatitis C transmission – both in the community but also in prisons and other closed settings.

– Governments should ensure that people who use drugs are not excluded from treatment programmes, by establishing national hepatitis C strategies and action plans with the input of civil society, affected communities, and actors from across the HIV, public health, social policy, drug control and criminal justice sectors.

– Governments must improve the quality and availability of data on hepatitis C, strengthening surveillance systems and better evaluating prevention and control programmes. This will, in turn, help to raise political and public awareness of the epidemic.

– Governments should enhance their efforts to reduce the costs of new and existing hepatitis C medicines – including through negotiations with pharmaceutical companies to ensure greater treatment access for all those in need. Governments, international bodies and civil society organisations should seek to replicate the successful reduction in HIV treatment costs around the world, including the use of patent law flexibilities to make them more accessible.

– The Global Commission calls upon the United Nations to demonstrate the necessary leadership and commitment to promote better national responses and achieve the reforms listed above.
Act urgently: The ‘war on drugs’ has failed, and significant public health harms can be averted if action is taken now.

Hepatitis C is a highly prevalent chronic viral infection, which poses major public health, economic and social crises, particularly in low and middle- income countries. The global hepatitis C epidemic has been described by the World Health Organization as a ‘viral time bomb’, yet continues to receive little attention. Access to preventative services is far too low, while diagnosis and treatment are prohibitively expensive and remain inaccessible for most people in need. Public awareness and political will with regard to hepatitis C are also too low, and national hepatitis surveillance is often non-existent.

Instead of investing in effective prevention and treatment programmes to achieve the required coverage, governments continue to waste billions of dollars each year on arresting and punishing drug users – a gross misallocation of limited resources that could be more efficiently used for public health and preventive approaches. At the same time, repressive drug policies have fuelled the stigmatisation, discrimination and mass incarceration of people who use drugs. As a result, there are very few countries that have reported significant declines in new infections of hepatitis C among this population. This failure of governments to prevent and control hepatitis disease has great significance for future costs to health and welfare budgets in many countries.

In 2012 the Global Commission on Drug Policy released a report that outlined how the ‘war on drugs’ is driving the HIV epidemic among people who use drugs. The present report focuses on hepatitis C as it represents another massive and deadly epidemic for this population. The report provides a brief overview of the hepatitis C virus, before exploring how the ‘war on drugs’ and repressive drug policies are failing to drive transmission down.

The silence about the harms of repressive drug policies has been broken – they are ineffective, violate basic human rights, generate violence, and expose individuals and communities to unnecessary risks. Hepatitis C is one of these harms – yet it is both preventable and curable when public health is the focus of the drug response. Now is the time to reform.

Your ticket for the: Seven Former Presidents, Richard Branson and Other World Leaders: Criminalization of Drug Use Fuelling the Global Hepatitis C viral time bomb