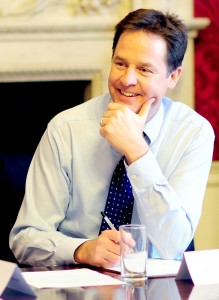 Nick Clegg is the former Deputy Prime Minister of the United Kingdom. He is currently Vice President of Global Affairs and Communications for Facebook.

Nick spent a decade working in the EU – first as a senior adviser in the European Commission dealing, amongst other things, with the accession of China and Russia into the World Trade Organization, and later as a Member of the European Parliament between 1999 and 2004.

In, 2005, he was elected to the UK Parliament, and became leader of Britain’s third-largest political party, the Liberal Democrats, two years later. Following the 2010 election, he led his party into Government for the first time since it was founded, establishing Britain’s first post-war Coalition Government and serving as UK Deputy Prime Minister from 2010-2015.

Following the 2015 General Election, Nick stood down as Leader and left Parliament in 2017 following the loss of his seat. As one of the most high-profile pro-European voices in British politics, he played an influential role in the debate around Brexit following the referendum in June 2016 and established Open Reason, a Think Tank examining issues as diverse as drugs policy and the fourth industrial revolution.

His best-selling book, Politics: Between the Extremes, is a reflection on his time in Government and the place of liberalism in the current political landscape. His second best-selling book, How To Stop Brexit (and make Britain great again), set out the case for a rethink of Brexit.

Nick was educated at Westminster School, and studied at the University of Cambridge, the University of Minnesota and the College of Europe. He received a knighthood in the 2018 New Years Honours list in recognition of his political and public service. Nick currently lives in California with his wife, Miriam, and three sons.